Watch Out for MegaStorm! 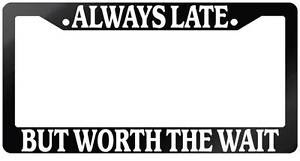 Written by SurfWriter Girls Sunny Magdaug and Patti Kishel
Just like the drivers with those license plate holders, the long-awaited rains finally showed up in California...a year late. 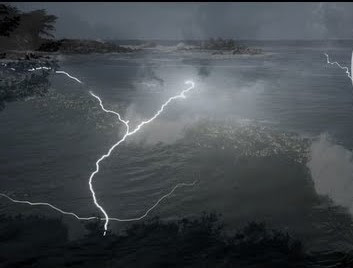 Last year scientists were calling the expected El Nino "the Godzilla of storms" and predicting the biggest rainy season in years. 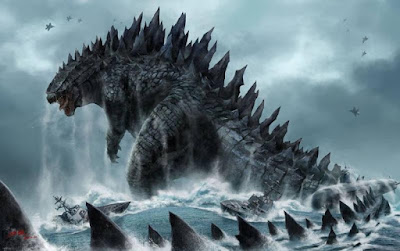 We all know that didn't happen. But what a difference a year makes. Thanks to an atmospheric river of water vapor off the Pacific Ocean called the "Pineapple Express" the rains made it to California. 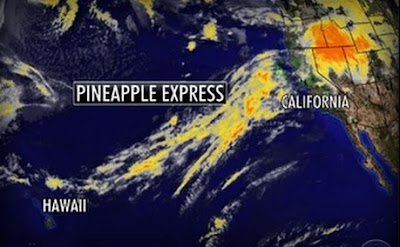 Now no part of the state is in "extreme drought" conditions. A year ago it was 40%.
The Sierra Nevada snowpack is currently "way above normal," says National Weather Service meteorologist David Miskus. In January the snowpack reached levels that aren't normally seen until April. With the Southern Sierras at 219% of average! 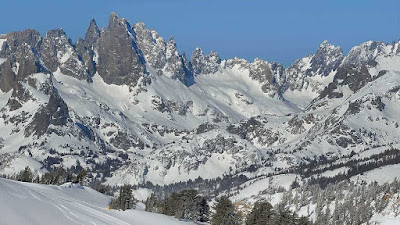 SurfWriter Girls Sunny Magdaug and Patti Kishel learned that the amount of rain since October has been much higher than average throughout the entire state.
Water levels in Lake Shasta, California's largest reservoir, have rebounded after record lows.

In Northern California the San Luis Reservoir West of Los Banos is expected to fill for the first time in six years. 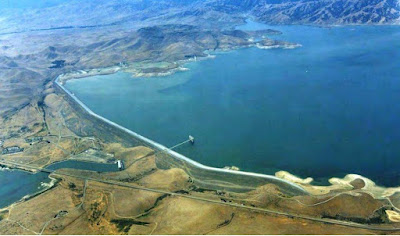 Oroville Dam near Sacramento not only filled, but has had engineers monitoring it to avoid flooding. 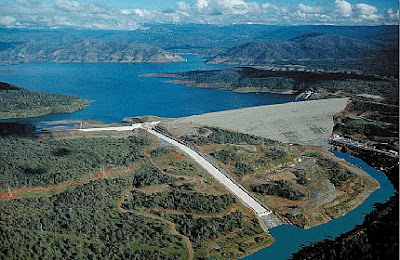 While this year's rains caught everyone by surprise, scientists with the US Geological Survey say that even more rains may be on the way, noting that "California is due for an epic rain." Records show that every 100 to 200 years California experiences massive rainfall and floods. 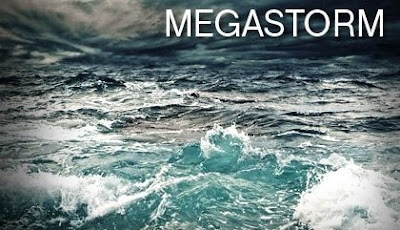 To help the state prepare for a megastorm - like the 43-days of rain that hit California in 1862 - the USGS has put together a scenario called ARkStorm that assesses where and how to deploy resources in the case of flooding and other emergencies.

That megastorm came after a period of prolonged drought, too, and put much of California's Central Valley underwater. The flooding in Sacramento was so bad that people had to use boats to get around and the state capital was temporarily moved to San Francisco. Drought or deluge? Only time will tell. For now, in California we've learned to keep our umbrellas handy. 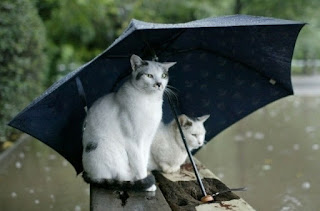 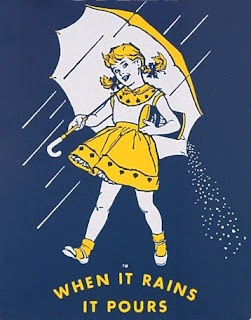 Wave Riding in Palm of Your Hand!

Which is best, board surfing or body surfing? Why not combine both? Action sports company Slyde has done just that with its unique handboard that turns Everyman into Aquaman. 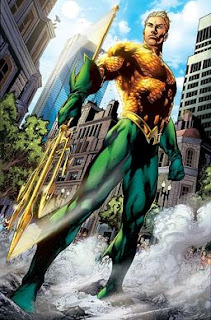 Based in San Clemente, CA, Slyde is like "the little engine that could," spreading the word about its handheld board that fits over your hand and lets you grab onto a wave. 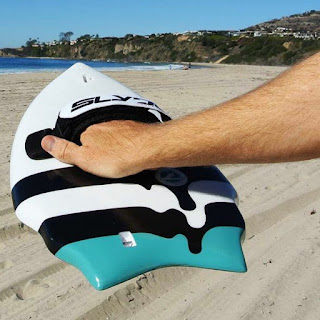 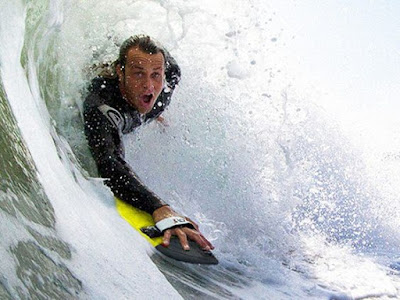 "Bodysurfing with a handboard is simply way more fun than bodysurfing without," Slyde explains on its website. "The handboard allows the bodysurfer to get more speed and lift out of the water. It is not uncommon to generate enough speed to round a section of a wave or to get barreled." 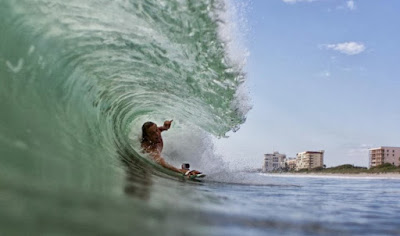 Company owners Steve and Angela Watts got past the initial skepticism and puzzled looks about what in the world their handboard contraption was to prove that Slyde was ready to swim with the sharks. Not your everyday sharks, but the Sharks on ABC's reality show Shark Tank. 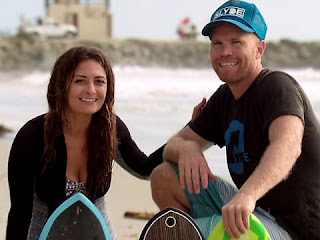 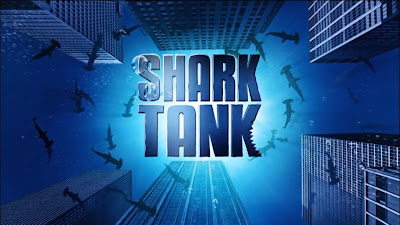 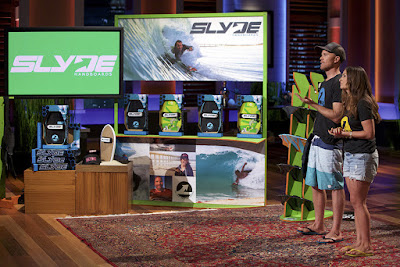 Sharks billionaire Mark Cuban and actor/businessman Ashton Kutcher were so impressed with the couple's business presentation that they made a joint investment of $200,000. Cuban, who already owned a stake in Tower Paddle Boards, thought Slyde fit perfectly with that. And, Kutcher wanted to try out the handboard himself! 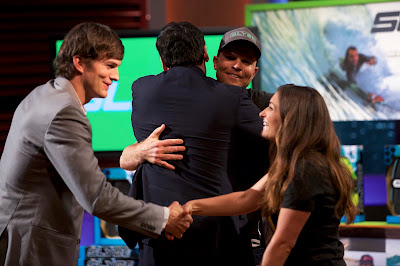 Steve and Angela are glad they took a gamble in going on the show last year - trying out three times to get on! "Working with Mark and Ashton is a dream, " Angela told SurfWriter Girls Sunny Magdaug and Patti Kishel. "Everything has been non-stop since the show." 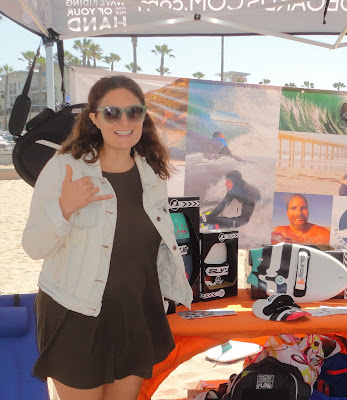 Slyde lives up to its slogan of providing "Epic wave riding in the palm of your hand." With no surfboard to pack or transport, the handheld boards easily go where you go.

Steve dates the idea for the Slyde handboards back to his teen years in South Africa when he and his pals used food trays to get a hydro dynamic edge in catching waves.

The trays gave "lift and extra speed." Who would have guessed that they would be the forerunners that led to the development of the Slyde handboards and a way "to enhance the bodysurfing experience for everyone.” 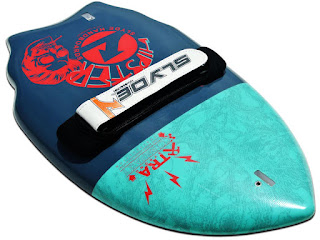 Going Hollywood made a big change in Slyde. But it hasn't changed the duo behind the company. At a Surfrider Foundation beach cleanup Angela said to SurfWriter Girls, "It's important to be involved in the community." She and Steve still make time to pick up trash on the beach and to support environmental groups. 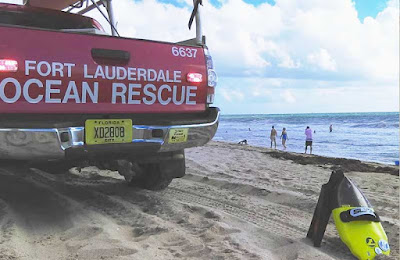 Slyde launched the Slyde Ambassador Program to encourage and reward people who are doing positive things "for the earth, ocean, or humanity.”

Like the ever-present Frisbee, that started out as a pie pan people tossed back-and-forth, the Slyde handboard has evolved from a food tray into an industry...and a way of life. 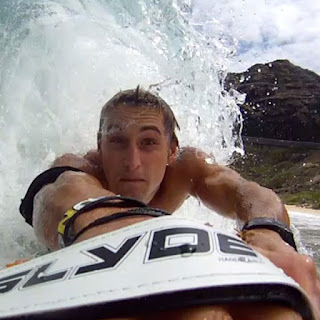 
Surf’n Beach Scene Magazine
Please post your comment below. Comments will appear the next day.
“Like Us on Facebook!”
Sunny Magdaug and Patti Kishel hold the exclusive rights to this copyrighted material. Publications wishing to reprint it may contact them at surfwriter.girls@gmail.com Individuals and non-profit groups are welcome to post it on social media sites as long as credit is given.
Posted by Sunny & Patti at 12:45 PM No comments: