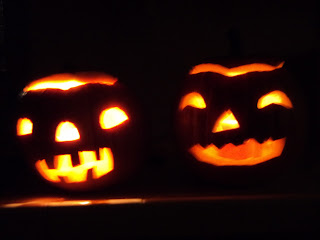 Tony looked at the dial of his Rip Curl watch, noting that it was already 4:30. “Let’s start taking down the Surfrider tents and putting things away,” he said to Casey. “I’ve got to get home to hand out the Halloween candy.” 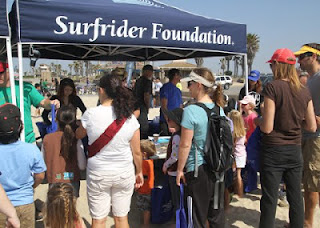 “Me, too,” Casey said, scanning the beach from their spot by the Huntington Beach Pier. “We had a really good turnout today.” 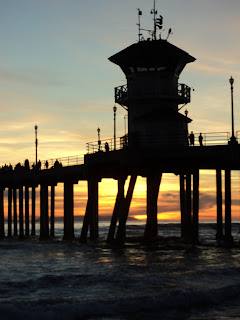 “Not bad,” Don agreed. “I gave out lots of cigarette butts containers. Maybe they’ll help to keep some butts off the beach.”

“You should see the garbage that Greg and I picked up today,” Seth said... 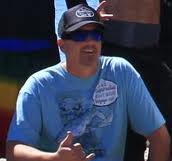 dumping his beach cleanup bag into a trash can. 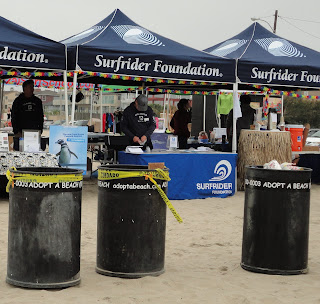 “I’m always amazed at the trash people leave behind,” Greg observed, pulling a rusted electric hair dryer out of his bag.

“The coffee’s almost gone,” Gilbert announced, checking the dispenser that had been filled with his special brew of Java Jaws Surfers Blend Coffee. 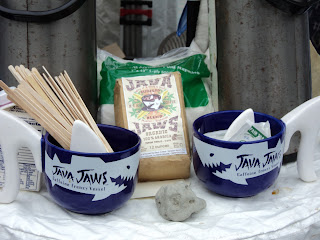 "Save some coffee for us!" Sunny and Patti said, tossing more trash into the can. "It's getting cold out here.” 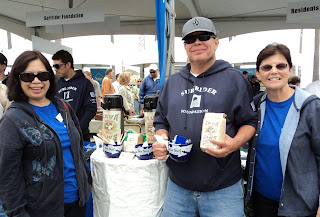 “We gave out a whole box of beach cleanup bags,” Jeff said, looking up from an empty carton. “Plus Manuel and I signed up three new people for the Blue Water Task Force water testing program.”

“Way to go!” Tony exclaimed, giving Jeff and Manuel high fives. “We got a lot of signatures on the Rise Above Plastics petition, too.”

“Yeah, people are really stoked about getting rid of plastic bags,” Gene added.

Sunny reached for the clipboard with the petition and held it out to a surfer she spotted heading their way. “Would you like to sign our petition and get rid of the bags and trash in the ocean?” she asked brightly. “Here’s a beach cleanup bag, too.”

The surfer gave her a dismissive glance. “Why? Do I look like a janitor?” he asked sarcastically, taking a drag on the cigarette he was smoking.

Everyone in the booth stopped what they were doing and stared at him in surprise, not believing what they’d heard.

“We just thought you might want to help keep our beaches clean,” Tony intervened, stepping forward.

Shifting his surfboard from one arm to the other, the surfer looked at him smugly. “That’s why I pay a fortune in taxes.”

“Haven’t you heard about the gyres?” Sunny chimed in. 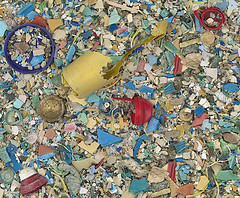 Chris Jordan Gyre ©
Chris Jordan’s work “Gyre” depicts 2.4 million pieces of plastic, equal to the estimated number of pounds of plastic pollution that enter the world‘s oceans every hour.
“Yeah, all the trash in the water below the surface,” Manuel added.

“All kinds of stuff swirling around in the gyres – plastic bags, bottles, even surgical needles. If we don’t clean it up, it just gets worse,” Casey pointed out. 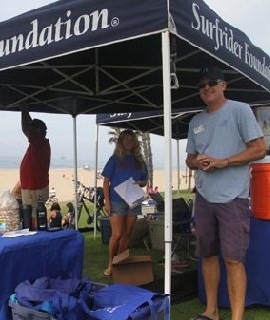 “Oooh, goblins, gyres and ghouls,” the surfer answered back. “I’m sooo scared. My knees are shaking.”

“You should be scared,” Patti told him.

“That’s right,” Mike said, joining in. “I’ve been surfing a long time and the trash I’ve seen in the water is no laughing matter.”

“Well, it looks good to me – another perfect California day,” the surfer declared, flicking his cigarette butt on the beach in front of them.

Tony grabbed ahold of Don to keep him from punching the guy out. “Never mind, it’s not worth it. He’s a jerk. C’mon, let’s finish up.”

“You got a problem with it, sue me!” the surfer laughed, moving on toward the water. 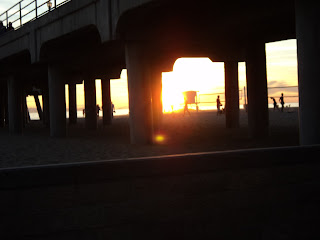 Paddling out into the waves, the surfer thought to himself, “What a bunch of losers. The kind of do-gooders I pick apart in court every day. If they knew what my billable hours are at the firm, they’d think twice about wasting my time. I’ve got more important things to do than worry about trash.” 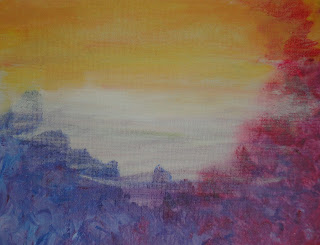 The swells looked really good. He could probably get in a few sets before going to the Halloween party at the club.

Positioning his board at the wave break just south of the pier... 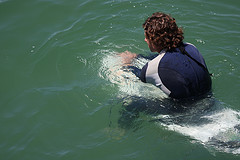 he noticed some plastic bottles floating nearby, but quickly put them out of his mind. Besides, the crest of a huge wave was hurtling toward him.

Then, at the critical moment, he stood up, ready for the wave to take his board…

But, nothing happened…He wasn’t moving.

Suddenly there was a sharp tug on his leg. Looking down, the surfer could see something slimy wrapped around his leg, tightening its grip on him…holding him in place…a piece of kelp…no, it was too shiny…a plastic bag…connected to another bag…and another…all tangled together…

He tried to pull it off, but it tightened even more.

Then, all at once, it yanked him off the board…and he was underwater… 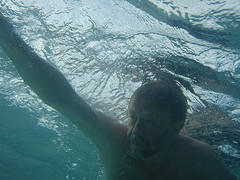 being pulled down relentlessly… into a swirling vortex of plastic bags, bottles, cups and straws, tooth brushes, take out containers, chunks of Styrofoam, suntan lotion tubes… every kind of trash imaginable. 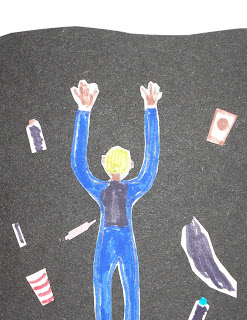 “What is this?” his mind screamed as syringes stabbed at his arms and legs.

Frantically he tried to swim to the surface, but he could barely see in front of him. There was so much debris spinning around. 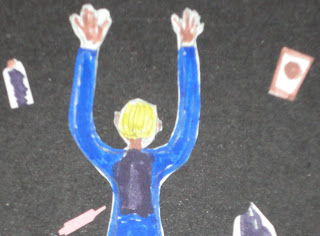 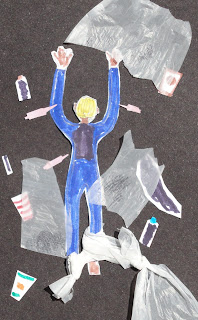 sealing his body in a cocoon of plastic.

There was no escape, he finally realized, as his last breath of air gave out… 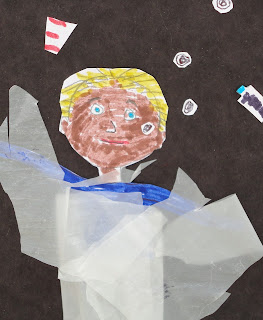 and he was sucked into the gyre’s grisly Tidal Wave of Trash. 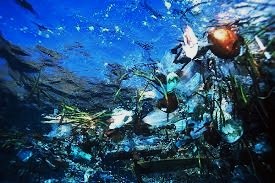 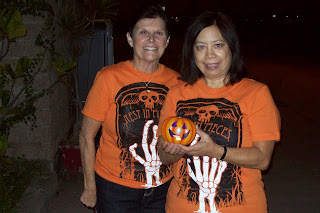