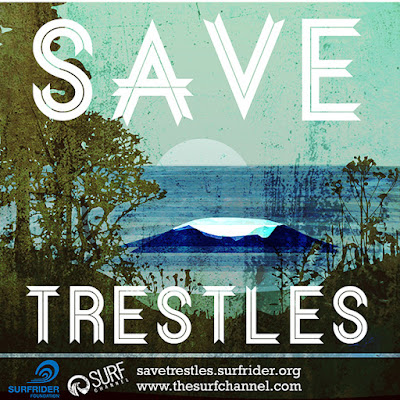 Ho, Ho, Ho! Surfers in Southern California are thankful this holiday season for the early gift they got - the news on November 10th that Trestles, an iconic surfing spot at San Onofre State Beach in San Diego County, is going to be saved from having a six-lane toll road run through it. 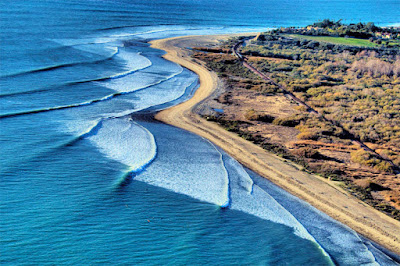 Thanks to persistent lobbying the past 15 years by the Surfrider Foundation and other environmental groups, the Transportation Corridor Agency (TCA) has agreed to treat San Onofre State Beach as a protected area. The TCA will "refrain from building or funding a road project" at San Onofre, as well as the Richard and Donna O'Neill Conservancy and areas within the San Mateo Creek Watershed. 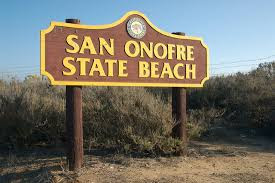 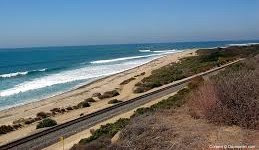 As they say, "It takes a village" to get things done. And, in this case, it was a "village" of surfers, environmental activists, concerned citizens, the Sierra Club, and more, who formed the Save San Onofre Coalition (SSOC) to build public awareness of the importance of the San Onofre coastal site and to fight the proposed expansion of the 241 toll road.
Speaking for the SSOC, Elizabeth Goldstein joyfully said, "This settlement gave us what we've been fighting for all along." 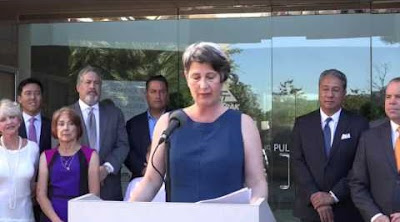 Chad Nelsen, Surfrider Foundation CEO, thanked the "army of members, supporters and partners" who helped to block the toll road. "Standing with us for every victory, those victories helped us to arrive where we are today - achieving this landmark settlement to forever save Trestles." 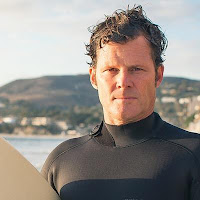 Surfrider’s former SoCal Regional Manager Nancy Hastings sent congratulations from her new port of call in Massachusetts. “So glad I was able to play a small role in the EPIC battle to Save Trestles! This effort spanned over a decade and could not have happened without the hard work and dedication of countless volunteer grassroots activists. 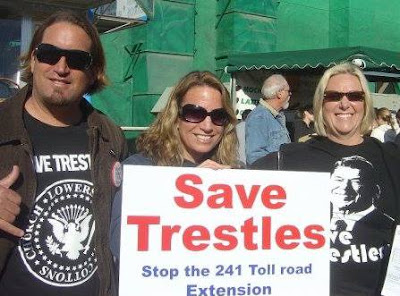 Trestles, a collection of beaches consisting of Upper, Lower and Middle Trestles, is named after a wooden trestle bridge that surfers used to have to walk under to reach the celebrated surf spot. 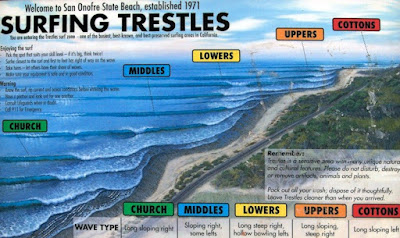 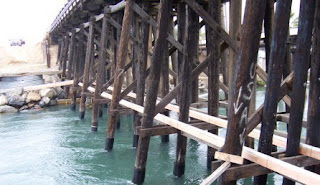 The namesake bridge was replaced with a concrete viaduct in 2012, but the surfers taking the 15-minute hike from the trailhead at Cristianitos Road down to the beach continues. 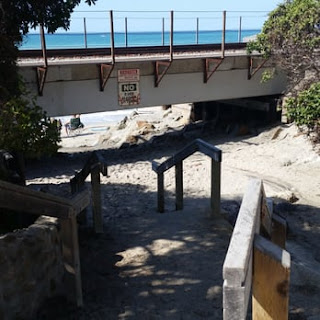 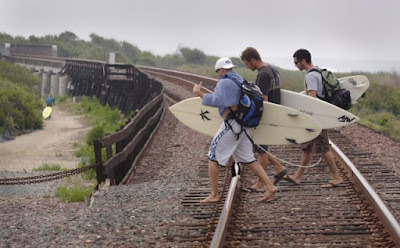 Picturesque shots of the beach were frequently seen on television when Richard Nixon was president since his home, La Casa Pacifica, (AKA The Western White House) was located on the bluffs on Cotton's Point above Cottons surf break North of Upper Trestles. 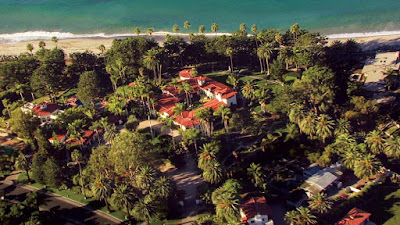 SurfWriter Girls Sunny Magdaug and Patti Kishel learned that, in addition to the victory for Trestles, the TCA has also agreed to establish a $28 million conservation fund to help preserve and protect San Mateo Creek and its watershed. The 22-mile-long creek is one of the last unchannelized streams in Southern California and it supports a biologically diverse ecosystem of plants and animals. 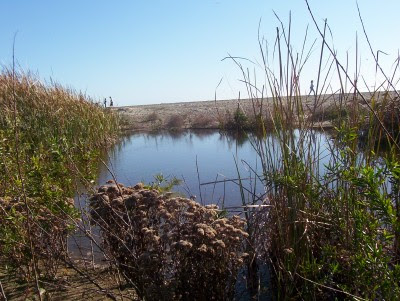 Saving Trestles - the perfect gift for surfers...a forever gift of nature we all can enjoy.


To Save The World's Oceans 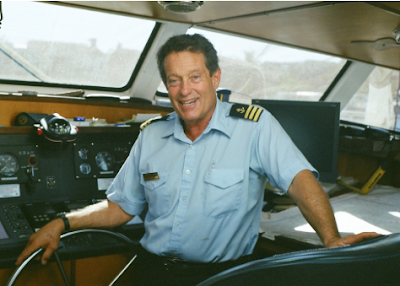 On a sailing trip from Hawaii to California in 1997 Captain Charles Moore made a fateful change of course that changed the direction of his life. 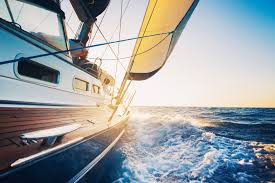 Trying to get home in a windless sea, Moore took a shortcut that put him in the middle of a "plastic soup" ocean strewn with plastic litter - bottles, bottle caps, rope, fishing nets and "broken-down bits of former things." 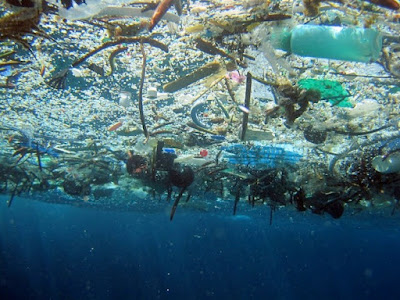 Later in Natural History magazine Moore wrote, “As I gazed from the deck at the surface of what ought to have been a pristine ocean I was confronted, as far as the eye could see, with the sight of plastic."
This accidental discovery of flotsam and jetsam a thousand miles from land in a remote part of the Pacific Ocean would eventually come to be called the Great Pacific Garbage Patch. And, like the canary in a coal mine, it would stand as a warning to civilization of the man-made dangers floating in the sea.

Unable to forget this ocean of trash, Moore created the Algalita Research Foundation and dedicated his life to keeping plastic pollution out of the ocean.

Sailor, scientist, author and environmentalist, Captain Charles Moore has received numerous awards. And, when he speaks about the dangers of plastic in our oceans, people listen. SurfWriter Girls Sunny Magdaug and Patti Kishel saw this firsthand recently at the Surfrider Foundation Huntington/Seal Beach Chapter’s meeting. 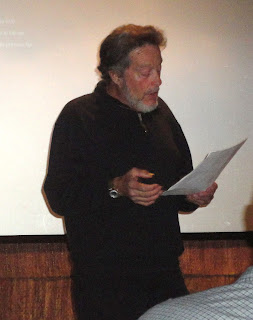 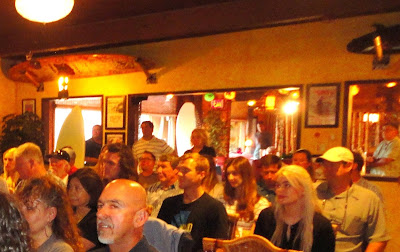 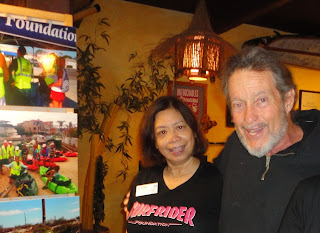 The room was packed. Everyone wanted to talk to Captain Moore and get autographed copies of his critically-acclaimed book Plastic Ocean (co-written with Cassandra Phillips). 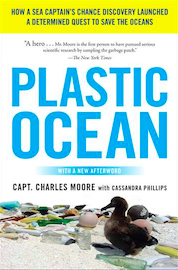 Many have compared it to Rachel Carson's landmark 1962 book Silent Spring that alerted the world to the dangers of pesticides in the environment.
Moore informed the audience that the plastic pollution is so bad that there's currently "six pounds of plastic in the ocean for every pound of plankton." 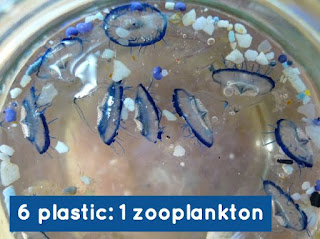 Autopsies have found that some fish had stomachs almost entirely filled with indigestible plastics. Plastic is ingested by sea turtles, seals, birds and other animals, too - either directly or when they eat the fish. And, ultimately, having entered the food chain, the plastic is eaten by man. 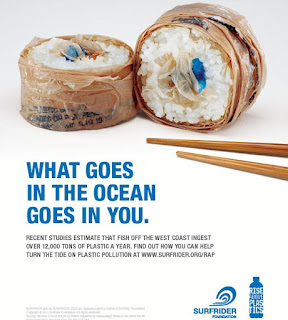 Anyone who hears Moore speak or reads his book can't help but feel sorrow for the fate of the ocean's sea life from plastics. Moore quotes renowned oceanographer Sylvia Earle's book Sea Change, noting "even though plastics lack their own 'detectable aroma...they bring to the sea the smell of death.'"

Since Moore first discovered the sea of plastic floating in the Pacific Ocean the Algalita research team has made multiple expeditions to its location in the North Pacific Gyre (a ring-like circle of rotating currents). 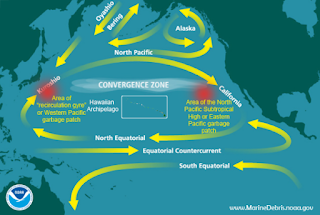 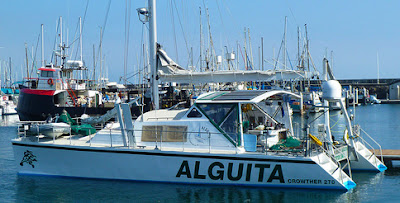 The foundation's ocean research vessel the Alguita is a 50-foot, 25-ton catamaran with state-of-the-art electronics. Currently it is developing a Plastic Ocean Index using geographical information system (GIS) data to enable researchers to monitor and track the presence of plastic in the ocean. A Herculean task, this is vitally important.

150 million tons of plastic waste are in the ocean now.

8 million more tons of plastic are added each year.

By 2050 the plastic in the ocean will outweigh the fish

Moore continues to warn people about the irreparable damage that can come from the products we use every day - plastic bottles, cups and straws, utensils, take-out containers, shipping pellets, fishing lines and nets… even party balloons. Things that all become deadly when discarded into the world's waterways and oceans. 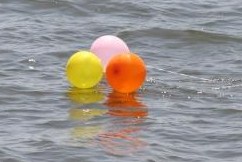 The New York Times calls Captain Charles Moore "A hero." So does the Peter Benchley Ocean Awards organization and many others. In the words of Forbes magazine, his book Plastic Ocean is "a hero's call to action." 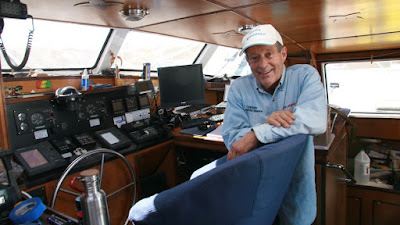 With Earth’s fate hanging in the balance, it's critical that we heed that call. 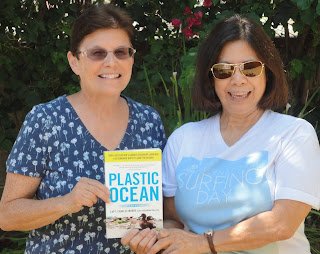 Sunny Magdaug and Patti Kishel hold the exclusive rights to this copyrighted material. Publications wishing to reprint it may contact them at surfwriter.girls@gmail.com Individuals and non-profit groups are welcome to post it on social media sites as long as credit is given.
Posted by Sunny & Patti at 3:12 PM 1 comment: