To experience how epic surfing can be, just step inside the doors at Huntington Beach's International Surfing Museum to see the Eddie Aikau exhibit. 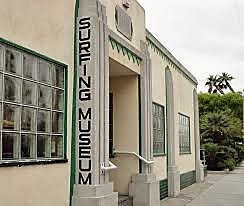 Showcasing legendary Hawaiian surfer and lifeguard Eddie Aikau, who was the first lifeguard on Oahu's famed Waimea Bay, the exhibit is a tribute to Aikau's life and legacy. 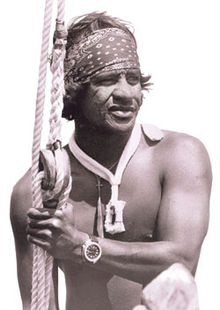 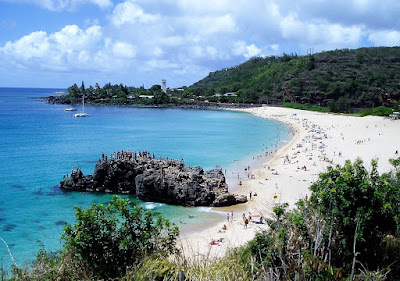 Museum executive director Diana Dehm told SurfWriter Girls Sunny Magdaug and Patti Kishel that the exhibit is one of the ways the museum can honor surfing's past and create a bridge with the present. 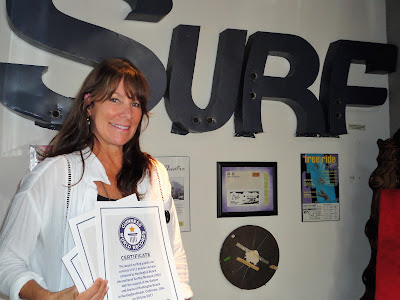 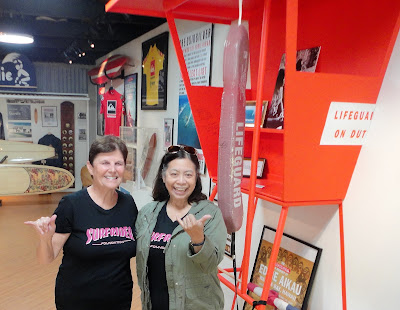 Dehm and archives collection manager Maria Ballas are working hard to make sure that surfing greats like Aikau aren't forgotten. 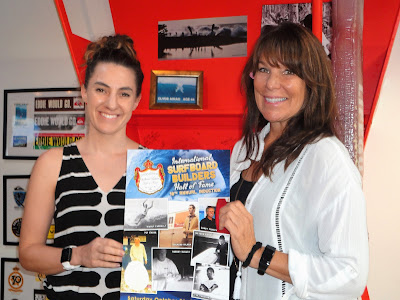 Definitely one to remember, Aikau (1946 - 1978) was known for being fearless and tackling the big waves. -  and is credited for saving over 500 lives. 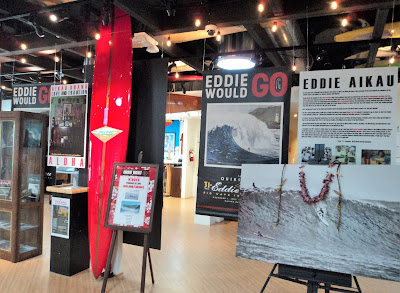 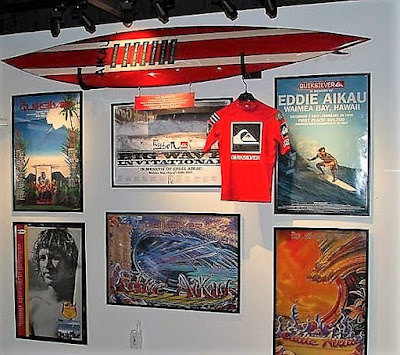 During Aikau's years as Waimea's lifeguard, he braved monster waves reaching 30-feet or more to make his rescues. No matter how bad the conditions, he never turned back. His dedication was so great that the locals always said, "Eddie would go." 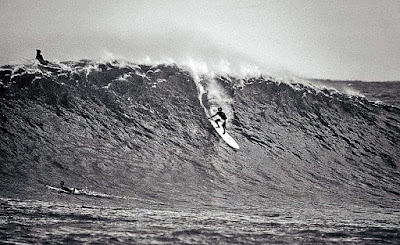 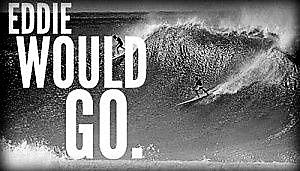 In recognition of Aikau's selfless bravery, top surfers come from around the world to compete in the Quiksilver Eddie Aikau Big Wave Invitational at Waimea Bay, an event that's only held when the waves are big enough - in the 30-ft range Aikau routinely faced. 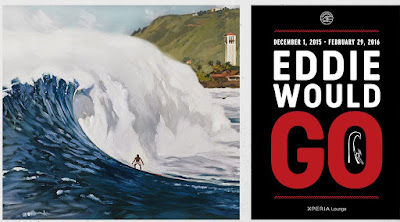 Winner of the Duke Kahanamoku Invitational Surfing Championship, Eddie Aikau's life ended tragically when he was lost at sea on a sailing expedition retracing the ancient Polynesians' 2,500 mile route between Hawaii and Tahiti. 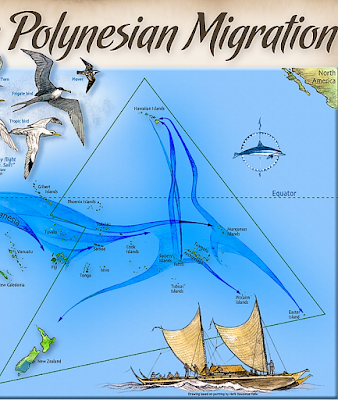 The outrigger canoe carrying the crew capsized and Aikau died heroically paddling on his surfboard toward Lanai Island trying to get help.

As he always had before, there was no question that Eddie would go.

Surfing in 1922. Whodunit? Agatha Christie dunit!
At a time when most people, let alone women, had never surfed, mystery writer Agatha Christie – the best-selling novelist of all time – took to the waves in South Africa, Australia and Hawaii. 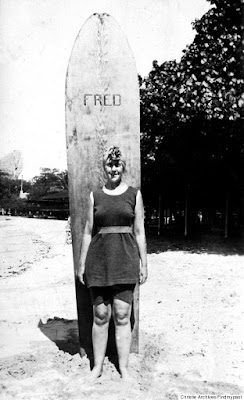 On an around-the-world book tour with her husband Archie, Christie discovered surfing for the first time at Muisenberg Beach in Cape Town, South Africa. 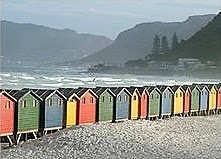 Eager to ride the waves herself, Christie soon realized that there was more to it than meets the eye. "Surfing looks perfectly easy," she wrote in her memoir. "It isn't. I say no more."
As a woman, one of her challenges was finding swimwear that could stand up to the waves. 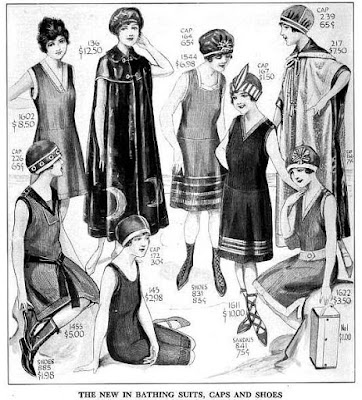 In Hawaii a particularly strong wave caused a "catastrophe," as Christie put it. "My handsome silk bathing dress, covering me from shoulder to ankle, was more, or less, torn from me by the force of the waves. Almost nude, I made for my beach wrap."
After that, Christie searched out something more practical, finding just the thing in a hotel shop – “a wonderful, skimpy, emerald green wool bathing dress, which was the joy of my life, and in which I thought I looked remarkably well. Archie thought I did too." 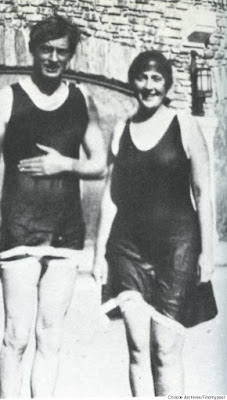 From that point on, there was no stopping her. Christie put the same determination into learning how to surf as she put into devising the intricate crime thrillers that were her trademark. Murder on the Orient Express, Evil Under the Sun, And Then There Were None, The Witness for the Prosecution, and countless others. 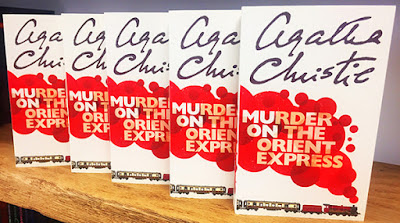 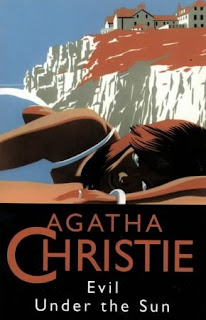 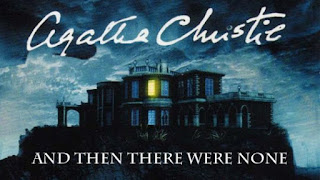 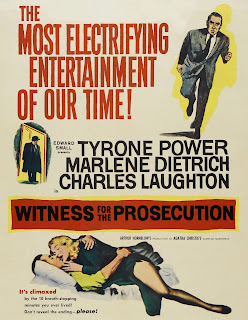 "All our days were spent on the beach and surfing,” said Christie, “and little by little we learned to become expert, or at any rate expert from the European point of view. We cut our feet to ribbons on the coral until we bought ourselves soft leather boots to lace round our ankles." 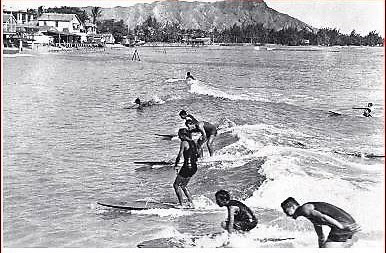 SurfWriter Girls Sunny Madaug and Patti Kishel are in awe of Christie's persistence in conquering the waves. Definitely hooked on this sport of Hawaiian kings, she described surfing as "one of the most perfect physical pleasures that I have known."

Like others – from Captain James Cook, the first European to reach Hawaii, to the Father of Surfing, Duke Kahanamoku – Christie was captivated by surfing. There's "nothing like that rushing through the water at what seems to you a speed of about two hundred miles an hour; all the way in from the far distant raft, until you arrived, gently slowing down, on the beach, and foundered among the soft flowing waves." 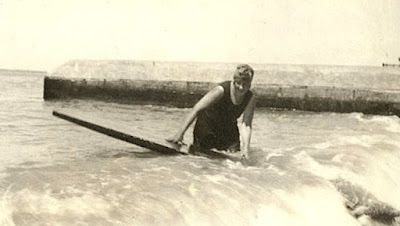 Far from being an arm chair novelist, Agatha Christie proved herself to be a true adventurer – as bold and mysterious as the characters in her books. 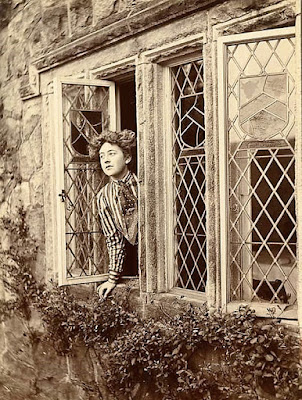